“Sacred music, being a complementary part of the solemn liturgy, participates in the general scope of the liturgy, which is the glory of God and the sanctification and edification of the faithful. Consequently sacred music should possess, in the highest degree, the qualities proper to the liturgy, especially sanctity and goodness of form, which will spontaneously produce the final quality of universality.” 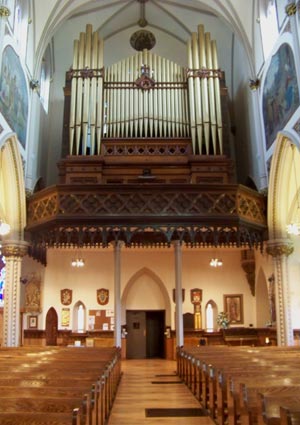 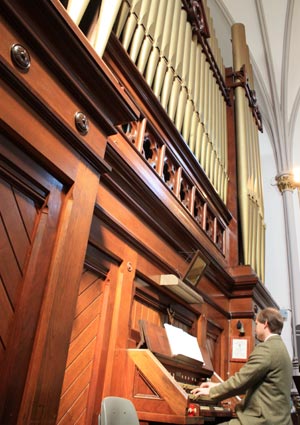 The organ of Saint John Catholic Church was installed in 1879.

The organ of Saint John’s Church was built by E.& G. & G. Hook and Hastings, organ manufacturers based in Boston, MA. It is the only remaining organ of its size and design left in the tri-state area. The organ has undergone neither alterations nor modifications since its installation. Its sound and look are exactly as they were in 1879.

The organ was purchased for a royal sum of $7000. It arrived in Orange via railway on November 8, 1879. Ox-drawn wagons carried it to the church to the curiosity and excitement of the local populace.

During the next month the organ, with its 2,412 pipes and 38 ranks, measuring 30 feet high, 22 feet wide, and 14 feet deep, was set up in the rear gallery. On Christmas Day of 1879, the organ began its long years of uninterrupted service with compositions by Mozart, von Weber, and Beethoven. The day concluded at the 10:00 AM Mass with “The Suspension Bridge March” by Mayer. Just a few miles away, many men were at work on The Brooklyn Bridge, then the longest suspension bridge in the world and considered the “Eighth Wonder of the World”.

In 1972, the Hartman-Beaty Organ Company of orange, NJ completed a restoration of the organ. The keyboard mechanism (the action) was renovated and pipes were cleaned, regulated and put back on proper speech. The reed pipes were also refurbished.

Originally hand-pumped, the organ required two persons to pump the organ bellows for regular use (although one could do the job if only a few of the organ’s tonal resources were used). This organ, a tracker instrument with pneumatic assist for the great keyboard and keyboard couplers, is totally mechanical. Its only compromise with modern times was the addition of an electric blower for the wind and electric lights. That aside, the organ is the same as when first heard that Christmas
in 1879.