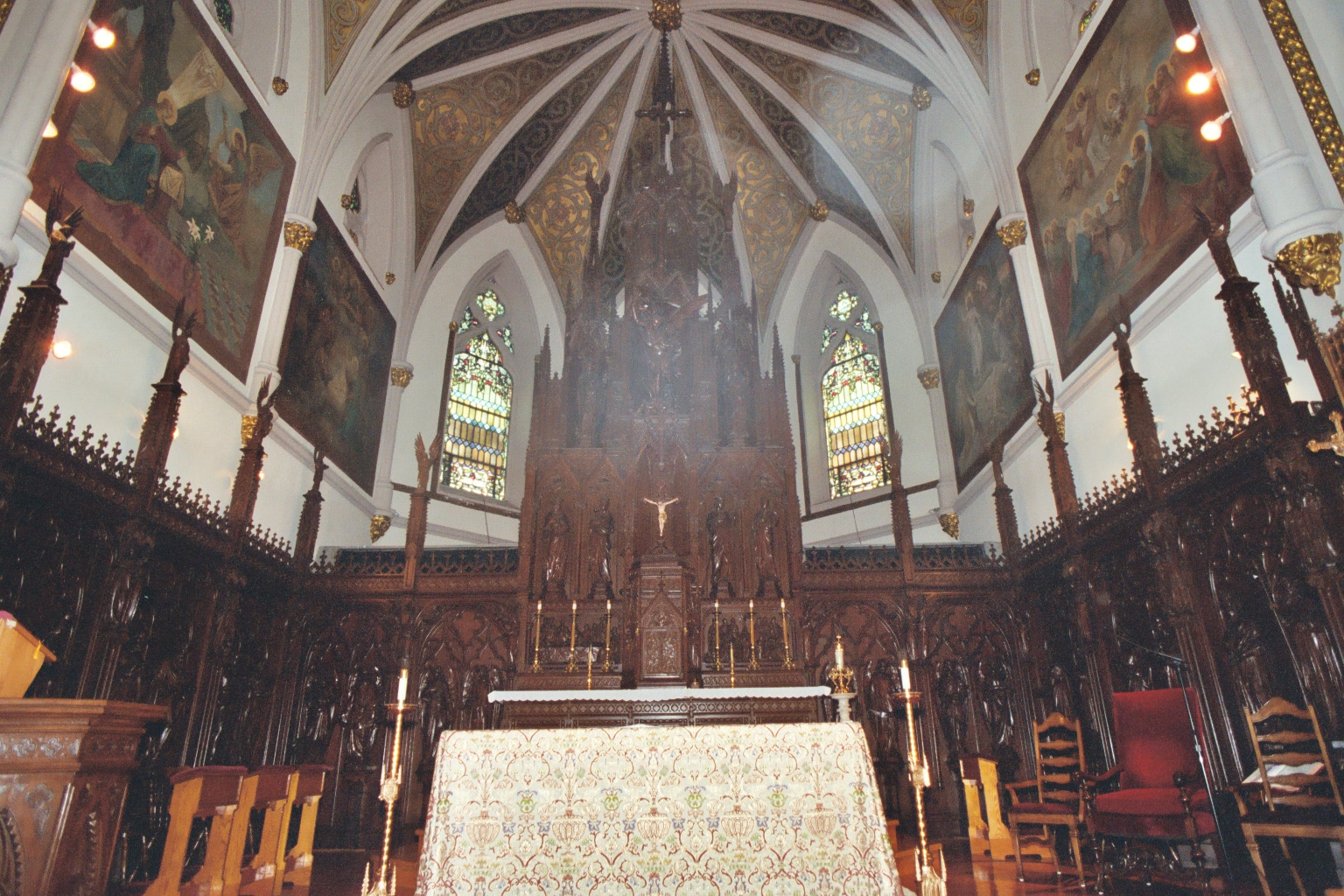 A Gothic gem situated on the highest mountain west of Manhattan, Saint John the Evangelist Church was designed by Newark architect Jeremiah O’Rourke who also designed the chapel at Seton Hall University, and the Cathedral Basilica of the Sacred Heart, Newark. The church was dedicated on October 10, 1869.

The brownstone exterior, a hallmark of Gothic Revival style was donated by philanthropist and real estate speculator Llewellyn S. Haskell from his West Orange quarry. Work began on June 24, 1866 under the direction of the pastor, Rev. Edward M. Hickey; the cornerstone was blessed and laid in September by the first Bishop of Newark, James Roosevelt Bayley. Although the church was completed in 1869, the tower and spire were not complete until 1881. The architectural features were copied from the Senlis Cathedral in France.

The spire features gargoyles and statues of the four evangelists. The original height was 200 feet, until 1922 when a gilded cross measuring seven feet was installed at the top of the spire. In 1915, a tower clock of four illuminated bronze dials, each six feet in diameter, was installed. The clock was a gift of A & P grocery chain founder and former Orange mayor George Huntington Hartford who was also the first person to be baptized in Saint John Church in 1869.

The parish school, Columbus Hall, was also designed by O’Rourke, and until 2012 a 25 foot tall gilded statue of the Sacred Heart of Jesus was mounted atop the building’s dome. The statue and the spire could be seen for miles. In 2012, a violent wind storm knocked the statue off of its foundation. It has since been recast in bronze as the church awaits funds to mount it once again atop Columbus Hall.

Most of the parish’s original stained glass windows were removed in 1931 and replaced. A few of the originals remain. Thevon Gerichten Art Glass of Munich installed windows above the main altar, including a large triple window (18 feet high and 7 feet wide) over the sanctuary and directly behind of the main altar On each side of the center window are single windows with blank panels and gothic canopies, each including a representation of three roses.[ Zettler Studios of Munich installed windows along the aisles of the nave.

The stunning center piece of the church interior is the carved oak paneling and reredos of the high altar, created by the Goyers Brothers of Louvain, Belgium, in 1892. The four rear panels which flank the altar contain angel figures in high relief. Each angel carries a scroll with a phrase from the Gloria. The carved work is continued on the reredos, with the Last Supper, other sacred scenes, and figures of angels and saints carried upward to a great height. Wooden panels lining each side of the sanctuary feature high-relief statues of the twelve apostles. The sanctuary parquet floor, installed in 1892, depicts inlaid vines and leaves and other magnificent floral patterns. Painted scenes from the life of Christ above the arches of the bays punctuate the awesome nature of what they represent. The 14 hand carved wood stations of the cross were installed in 1871.